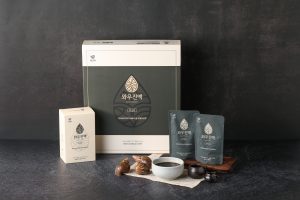 SUMMARY
‘If you want to make a healthy body without side effects, it is usually better to eat healthy food than medicine.
WowDrink Plus is a superior health food that anyone can eat.
WowDrink Plus is one of himchanmaru’s snail herbal extracts, the number one product sold online in Korea. It is a high-end product with the addition of ‘galanga’ which is known for its good health such as anti-cancer effect. Wow is the same pronunciation of the old times snail in Korea. To mean amazingly good food, I marked it as wow with similar pronunciation. Snail juice is an unfamiliar food overseas, but it is a familiar ingredient in Korea because it is mentioned in old Korean medical books.(Dong-uibogam, Bonchogangmog.)In Korea, it is especially famous for the health food that athletes eat a lot. All snails that enter are from Korea. In addition to snails, about 20 oriental medicine ingredients (hubs) that go well with snails are added based on traditional medicine. Besides snails, it is important to put in what ingredients and how much. We have obtained patents in Korea for this ratio and low temperature extraction technology.(Registration 1 case, Application 1 case). Put ingredients with a patented ratio in a large pot and boil them for over 36 hours by low-temperature extraction. Boil and pack in this deep essence form and it becomes a wowdrinkplus. This type of thicken juice food is called jin-aeg.
it’s a type of health food(htealty juice) that eat mostly in the Orient. It is not as light as tea and tastes similar to red ginseng juice. Think of the taste is thick as Oriental medical Herbal Tea . Snail is rich food in Chondroitin sulfate, mucin, collagen, and protein. Traditional famous medical books says snail juices are effective in treating diabetes, skin disease, and bowel disorders, restoring energy, and strengthening bones and joints. We boil the snail shell, which is proven to be rich in minerals including calcium, potassium, magnesium, and phosphorus through component analysis. It appears not only in Korea but also in many medical books in other countries. In the West, Romans also ate it as a health food. in Korea, people who exercise a lot and patients of various kinds eat for their health. (This product indicates that it is food, not medicine.) This food is patented in Korea and passed the FDA standard. it does not preservatives, artificial flavors, colorant and additive . The snail content is about 74%. In Korea, we have achieved No. 1 online sales (based on the number of post-sale sales) and No. 1 in Customer satisfunction.
It is also a sponsor company of the ‘World Championship Korea Preliminary Round'(Power Lifting).

FEATURES
?positive effect of wowdrink ?
(This product is not a medicine but a healthy food.)
-skin improvement
-Strengthening of bone joints, improving pain in the bone joints
-rejuvenation of one’s
-a person lacking a stamina
-a man of many physical activity
-Health food for growing
-Health food with mineral and various nutrients
-a man tired from frequent drinking
-People who want to increase immunity

relative height
The expiration date is one year(12 months). precautions : Do not heat it in the microwave as it is
How to eat healthy: on the empty stomach 2-3 times a day, 1pcs/ 1box 30pcs

Himchanmaru manufactures and sells healthy food. We are a solid patented company dedicated to research. As an award-winning company, we have been featured in the media many times.